Band Bio and Stage Plot located at bottom of this page.* 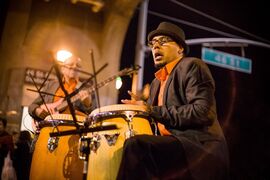 ﻿﻿﻿﻿﻿Cindy Bobe
Percussion & Vocals
​
"Cinsational's" versatility and compassion can be heard and felt through her percussive sharpness and timing; from the Latin & Jazz rhythms with the West African clave.

﻿﻿﻿﻿﻿Richie Robles
Bass Guitar & Vocals
​
Known as the "Club Kidd," has been on the Latin Jazz scene since the late 80's, starting his career with the group Brisa, and has performed in Canada and throughout the New York City area.

"DiTrap" has been playing professionally throughout New York City since the age of 17. A graduate of City College, he is a versatile musician with an incredible tone, capable of blending and crossing over genres with ease. In addition to playing alongside The Afro-Latineers, he is involved in various jazz and pop groups and is active as a jazz arranger. "Bam Bam" a percussionist from the Bronx, NY, influenced by percussionists such as Giovanni Hidalgo, Carlos “Patato” Valdes, Jerry Gonzalez and Nicky Marrero, has been in love with "salsa" and Latin Jazz ever since he was a young boy. Coming from a Puerto Rican household, Latin music was always present. Only 20 years of age; currently presenting he has what it takes to play with the top percussionists in Latin music.

Born in San Juan, Puerto Rico, "Juanki's" first contact with the guitar was at age 14 when he asked his parents to place him in private lessons. Upon graduating from high school, he decided to pursue his passion for music by enrolling into the Conservatory of Music of Puerto Rico; where he went onto graduate with a B.M. in Jazz and Caribbean Music Performance. He moved to New York City to pursue his M.M. in Jazz Performance at the Aaron Copland School of Music, which he completed in 2018. He currently resides in New York City where he is an active performer and educator.​
﻿﻿Notables﻿﻿
​
Joel Cruz
Soprano Sax, Percussion & Vocals

Shu Odamura
Jazz Guitar
​
Born and raised in Kyoto, Japan, Shu is the youngest participant and award winner in the Gibson Jazz Guitar Contest in Tokyo, Japan. Mr. Shu  is honored with The 38th Annual Jazz Station Awards as top 2nd acoustic guitarist. He studied at Berklee College of Music with Jon Damian and Greg Hopkins. Shu currently resides in New York City as a freelance guitarist and composer.
Powered by